By Amy Kuperinsky | NJ Advance Media for NJ.com
Going to the supermarket these days can feel more like a dare than a chore.
The snaking lines, the customer limits, the backed up curbside pick-up — not to mention the untold exposure to the coronavirus with each trip.
But farms across New Jersey are rising to the occasion with fruits, vegetables and that down-home touch. From curbside pickup and delivery to altered farmers’ markets and Community Supported Agriculture (CSA) shares, the Garden State is in full effect. For many, farms provide a reliable alternative to the stresses of grocery shopping, even when local produce is not yet in season.
“Farmers are working," he tells NJ Advance Media. "We are going nonstop.”
Normally, the thawing weather would kick off events that would see the farm teeming with families visiting animals and picking fruit. The pandemic means Alstede’s event calendar has been wiped clean. In its place: a “farm-to-trunk experience."
Staff have taken on new jobs as personal shoppers, gathering produce to fill online orders for local delivery and curbside, contact-free pickup where orders are placed in each car’s trunk.
While only six to eight shoppers are allowed in the farm market at a time (seniors get the first hour to themselves), hundreds of items are now available for order on the farm’s website — from apples, blueberries and Brussels sprouts to eggs, steak and cherry pie. Up until recently, the farm only had a few products for sale online. The pandemic hit and the business model changed.
“We’ve adapted to changing circumstances, which is what we do in farming all the time," says Alstede, 55, now in his 38th year in business. "We always deal with things that we can’t control.”
As crops are being planted as usual across the farm’s 700 acres, there’s also been increased interest in the farm’s CSA program, which will start in May. Those who pay for shares up front receive local produce from spring through fall.
Pete Furey, executive director of the New Jersey Farm Bureau, says there could be reason for cautious optimism among farmers. The test, he says, will be when temperatures rise and plants are in bloom.
“This could be a blessing in disguise that people renew their appreciation for locally grown food," Furey says. “We produce high-quality, diverse food items in the local area and unfortunately they’re hardly rewarded for it because the food system passes them over."
“It’s ironic as heck, but sometimes our South Jersey produce gets into the wholesale market and goes out of state," he says. "We have the potential to sell a lot of produce to local New Jersey consumers.”
For now, CSA sign-up is also on the rise among customers at Dreyer Farms in Cranford.
“They want to know that they can have a box of fresh stuff every week," says co-owner Jessica Dreyer, 43. However, consumer demand has put growing produce in the Dreyer greenhouse on hold. The farm market has taken precedence.
“The demand for produce from farms is through the roof," she says. “I can’t keep up with the demand. It’s just too early in the season. What we’ve had to do is change our stores into little mini supermarkets because we have produce connections. I’m even selling toilet paper, I can’t believe it ... It’s pretty cool how it’s functioning better for the smaller guys."
The market, which opened for the farm’s 116th season on March 15, provided curbside pickup until it became too taxing. But the shopping experience (limited to 10 people at a time) is less enclosed than your average grocery store.
“We have 15-foot (open) garage doors all around the building," Dreyer says. "You can feel the breeze in the air when you’re picking out tomatoes.” Produce boxes being prepared for home delivery as part of the Home to Harvest service, a new venture from a local farm and its seltzer brand.Home to Harvest
Other farms have implemented personal shopping services, like Norz Hill Farm and Market in Hillsborough, which sets its produce out in a tent and takes orders from customers who line up outside. Only employees handle the fruit, vegetables and other food.
Keith Mitzak of AquaSprout Farms, a startup hydroponic farm in Branchburg, sells vegetables at Norz Hill’s reconfigured market.
“This put the pressure on us through the demand," says Mitzak, 34, of the pandemic. “We’ve done no advertising and we’ve had people from all of our (farmers’) markets contact us asking us how they can get our greens while the markets are closed."
Fresh Markets, which runs a series of farmers’ markets in Monmouth County that shut down in March, is tentatively reopening with a drive-thru market at Bell Works in Holmdel at the end of April. 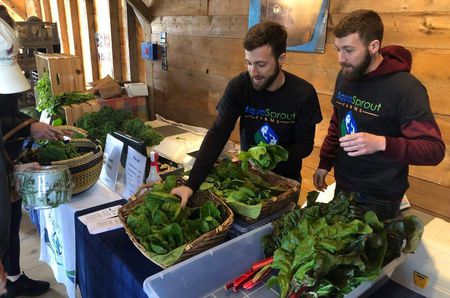 Brothers Stephen and Keith Mitzak from AquaSprout Farms, a hydroponic farm in Branchburg, at the Hunterdon Land Trust Farmers' Market.AquaSprout Farms
Steve Price of Branchburg’s River Lea House Farms sells garlic to customers at Hunterdon Land Trust Farmers’ Market in Flemington, which is moving to an open-air setting for the warmer season.
“They’d rather buy their produce outdoors from local people than go to supermarkets," he says.
The Flemington market will likely return to its weekly schedule earlier than expected in May and has been spacing vendors farther apart to allow for social distancing.
“Thank goodness we’re heading into spring instead of winter," says Devin Cornia, a manager there.
Whatever the temperature, customers are clamoring for produce like greens, broccoli and cauliflower at Johnson’s Corner Farm in Medford.
“People are struggling to get it," says co-owner Gil Johnson. “They don’t feel safe picking through displays and we’re working with some really legit companies that are getting us fresh product every day."
The farm takes online and phone orders (no cash), or drive-thru customers relay their lists to farmhands who do the rest. Customers will wait anywhere from 20 to 40 minutes in a line of cars to get their packages placed in the trunk.
“On our busier days we’re seeing hundreds of orders a day," says Johnson, 29.
Still, there’s no question that the pandemic threw a wrench into planned programming, shutting down summer camps at Abma’s Farm, which has 300 acres across Wyckoff, Mahwah and Hillsborough.
“We’re definitely feeling the agri-tourism and the farm tours and the U-pick could be on the down side," says co-owner Jimmy Abma Jr. His family has operated the farm since the 1920s.
The farm store is open, but shorthanded staff had to stop taking phone requests for pickup orders when the demand became overwhelming. Now, orders are online-only. Curbside pickup is reserved for high-risk customers, and free local delivery is only for seniors and those who are immunocompromised.
Gro-Rite, a garden center in Lincoln Park that has a farm in Belvidere, partnered with its Hillview company, which makes a hemp-infused seltzer called Kaló, to start a project called Harvest to Home. The service has been delivering produce from the farm and other suppliers to homes in Bergen, Essex, Morris, Passaic and Hudson counties, with more in its sights. It’s also offering staples like eggs and bread (and throwing in free cans of the seltzer).
“We’ve delivered over 4,000 fresh produce boxes around North Jersey," says Jeff Frommer, chief marketing officer. “At this point we’re almost doing 1,000 orders a day."Of course, boxes of fresh produce are already the territory of local CSA programs.
“The whole awareness of growing your food and knowing where it’s coming from has grown significantly since COVID-19," says Susan Barry, a volunteer for a Monmouth County CSA. She says it’s looking like sign-ups will more than double from last year.
Organic produce from Circle Brook Farm in Andover, Sussex County feeds the CSA. But farmer John Krueger had a close call just before the planting season got underway. He purchased plane tickets for his regular employees to come from Guatemala, but the country closed its borders and airport because of the coronavirus. He put out word to CSA volunteers, who arrived to help with cleanup.
“It was a chance for people who have been cooped up in the house to get outside," says Krueger, 63. He eventually got lucky when the airport in Guatemala opened for just two days, allowing workers to travel. The farm’s produce also feeds the Farm & Fork Society, a CSA group moving to Maplewood in June.
“They’re going to get food every week, where they may go the supermarket and it may not be on the shelf," says Melissa Goldberg, who runs the group. “It’s not going from California to another bin to a truck to a grocery person."
The only obstacle is distribution. Picking through bins of produce, as per custom, won’t do much for social distancing, so pre-boxing or bagging may be necessary.
“Farmers are the lifeline of this country,” Goldberg says. “Everybody needs to eat. They are the key to keeping us going.”
Newer Post Older Post Home