Open Your Eyes to the Beauty, Intelligence and Solutions the Fungi Kingdom

The Film Society of Summit and Farm & Fork Society to Host Two Showings of “Fantastic Fungi: The Mushroom” Movie Followed by Panel Discussion


Farm & Fork Society is partnering with The Film Society of Summit to host two screenings of the documentary “Fantastic Fungi: The Mushroom Movie” followed by a panel discussion on January 24th and January 31st. This visually stunning film amazes with time-lapse footage of mushrooms fruiting and opening our eyes to the more than 1.5 million species of fungi including yeasts, molds and mushrooms. The film teaches how important fungi and mushrooms play in binding the world together. 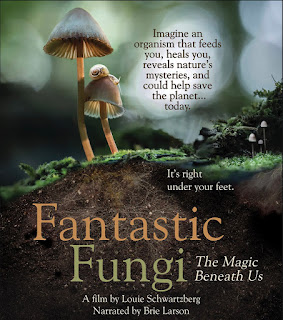 Directed by Louie Schwartzberg and written by Mark Monroe, who won a Best Documentary Oscar for “The Cove,” Fantastic Fungi tells the story of the importance that fungi and mushrooms play as the digestive force and “internet” of the plant world. In addition to the amazing cinematography, the documentary includes interviews with author Michael Pollan, science and food writer Eugenia Bone, and alternative medicine doctor Andrew Weil. Actress Brie Larsen narrates, and mycologist Paul Stamets explains the importance of fungi and their vegetative part, known as mycelium.
After the screenings, there will be a panel discussion led by Melissa Goldberg of Farm & Fork Society. On January 24th, the panel will include Dan Lipow, master forager and owner of The Foraged Feast, and Kyle Buller, whose near death experience as a teenager led him to study transpersonal psychology, holotropic breathwork and host a podcast called Psychedelics Today. On January 31st, Dan Lipow will return to join Matt Emmer of Field Trip Health, the world’s first integrated company in legal psychedelics.
January 24th screening takes place at 7 PM at Mondo Summit, 3rd Floor, 426 Springfield Ave, Summit, NJ.  January 31st screen takes place at 10:30 AM at Oakes Center, 120 Morris Ave, Summit, NJ
Tickets are $15 and can be purchased at https://www.summitfilmsociety.com
Labels: FFS Events
Newer Post Older Post Home

All Shares will be delivered to your doorstep.